It’s been too long since I posted any new images, and I feel it’s time.

Some of you might know I spent most of October in Japan on Honshu Island.  I visited the major cities of Tokyo, Osaka and Kyoto, but also really enjoyed the smaller cities and back country travelling on local buses and narrow gauge railways.  Takayama, Miyajima, Shinagawa-Go and Kanazawa come to mind.  It was the generosity and friendliness of the people that really made the trip a memorable one.  Even though I don’t read or speak Japanese, complete strangers helped me in train stations, on buses and even on the streets.  Most everyone speaks some English.  We even met strangers who invited us into their homes–a special experience in a country like Japan.

Yes, I took lots of photos, many at night.  I travelled with two cameras, (a Canon 6D and a Sony a6000).  Of course, I had my travel tripod and a small table-top tripod, too.  Sometimes lugging a tripod around all day can get very tiresome, since I was only on foot or using public transportation.  The table-top tripod was with me most of the time. 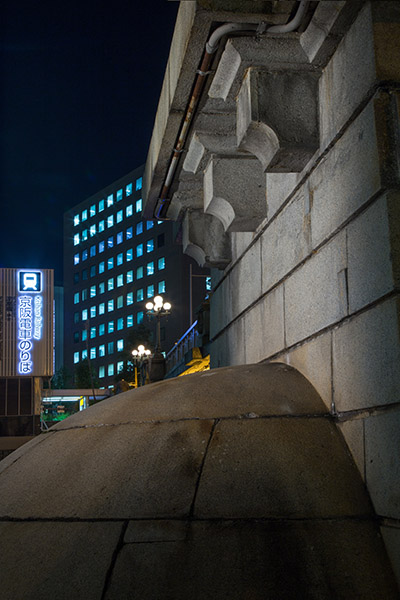 I dedicated one evening in Osaka to shoot in the city center and stumbled upon Nakanoshima Park which is on an island in the Okawa River.  The shapes of this old bridge buttress caught my eye, with the modern city in the background. 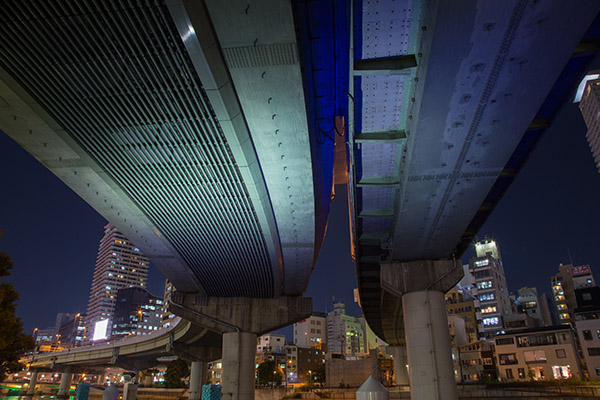 This highway came over the island park, across the river.  It seems I can’t get enough of bridges lately!  The blue light in the center is from a reflection of a blue LED light off of a pier. 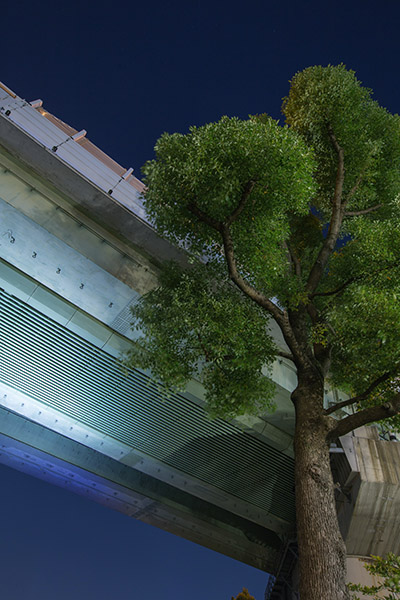 This majestic tree towers right up to the overhead highway.  It seems like all the trees in Japan are trimmed regularly–not just in the many gardens but alongside highways. 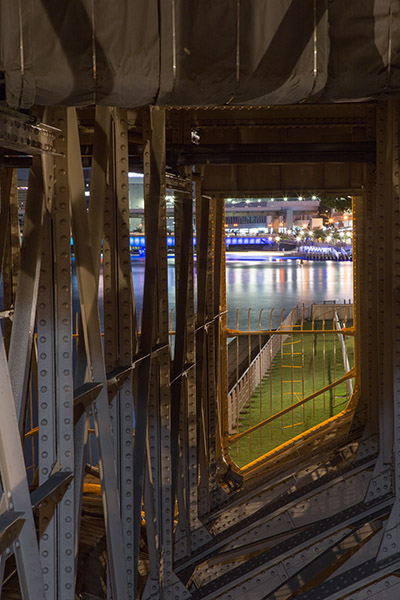 I took a stairway up to a bridge to leave the island and saw the interesting light within the steel structure of the bridge, with the city beyond.  This is where I saw one of the few homeless people hiding in the shadows during my month in Japan. 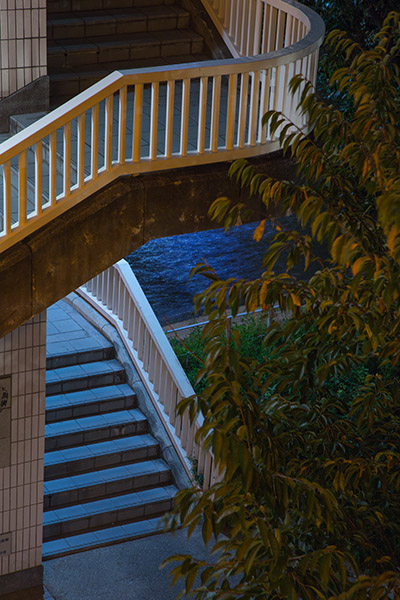 The mixed lighting on the stairway along with the shapes intrigued me.  Simple, yet complex in design to find the right vantage point for the composition I wanted.  No cropping here. 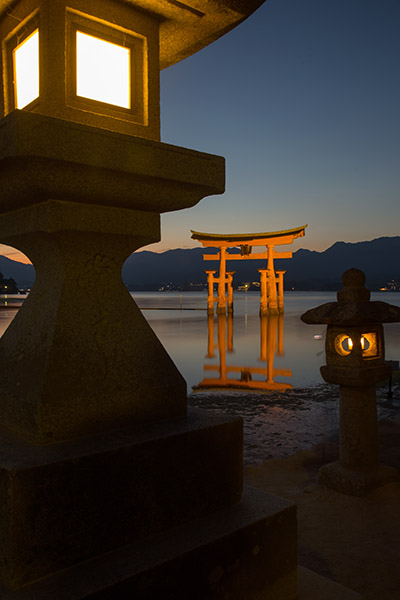 We made a special trip to Itsukushima Island, more commonly know as Miyajima (“The Shrine Island”).  Most visitors make the day trip out of Hiroshima, but we stayed in a local ryokan inn to be able to see the famed torii gate in the water at night after the day-trippers have left.  Even so, there were hundreds of people, both Japanese and foreign tourists who stayed and quietly watched the sunset.  The current torii is from the 16th century, replacing the 12th century one.  It was very mystical for all of us. 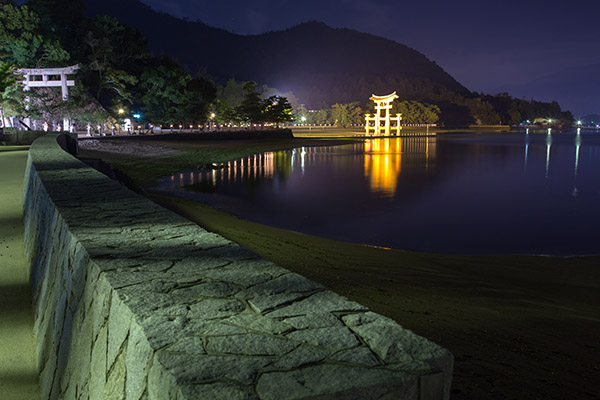 I wandered the grounds for a couple of hours afterwards to photograph and there were very few people out.  The little town of 2000 souls had all but shut down by 9pm.  I felt I almost had the place to myself.  Japan is a country of cameras and picture-takers.  It’s a real passion for them and the the reason why most cameras come from Japan.  It was nice never being hassled taking photos most anywhere–even with a tripod!  The exception was in temples. 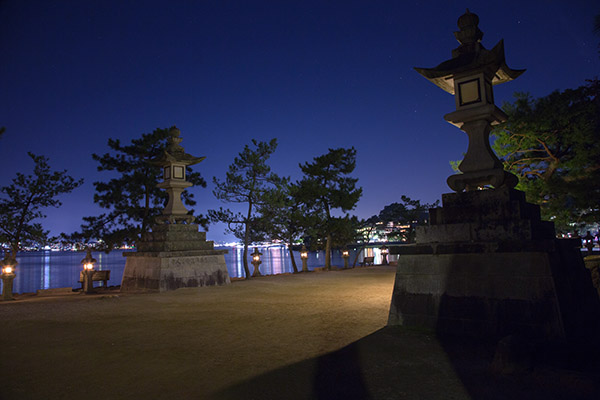 This view is typical of the paths around the many temples, pagodas and shrines on the island.  A few people walked through (but didn’t show up) during this one minute exposure, but they didn’t even see me and my tripod in the shadows. 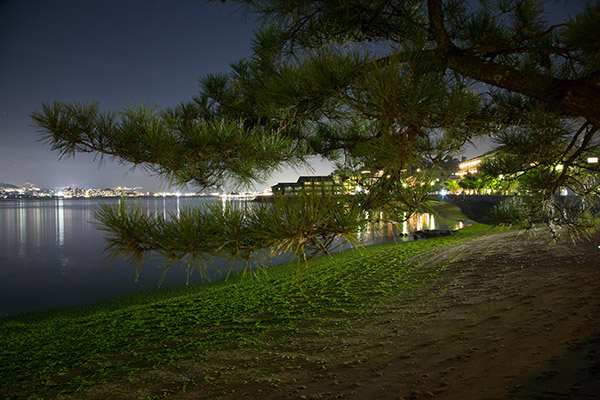 On the way back to the ryokan, I noticed that the tide had gone out revealing the algae on the rocky shore.  The evening was windless and dead still for this one minute exposure.  I positioned myself behind one of the pine trees (that seem manicured), blocking the lights, while back-lighting on the algae.  This is one of the images I made that really says “Japan” to me.

There are many other views and locations that I might post in a future blog, based on the feedback.  I’d love to hear from  you.

23 Responses to In Japan