The Bridges of Portland, OR

Recently, I was in Portland on business.  Portland is such a different city in July than what is was back in February, the last time I was there.

The sky was mostly clear and the weather in the high 80s to high 90s.  This time of year, the sun sets after 9pm, so I went out for some late night shooting for a couple of evenings. 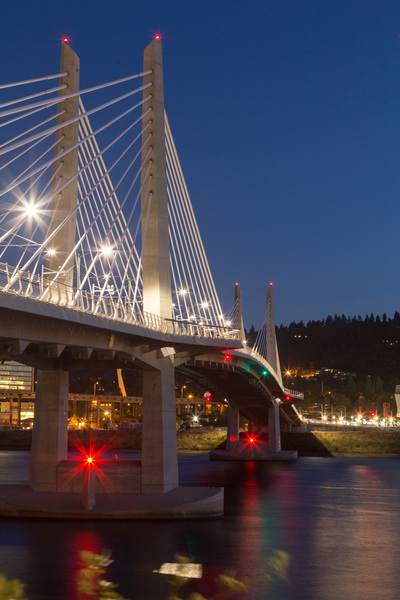 This is one of the reasons I was in Portland–to shoot the new Tilikum Crossing Bridge.  It is the longest bridge in the world–that doesn’t allow private cars or trucks (it’s for pedestrians, cyclists, buses and a new light rail line.)  For a bridge like this, twilight and at night was the best time to shoot. 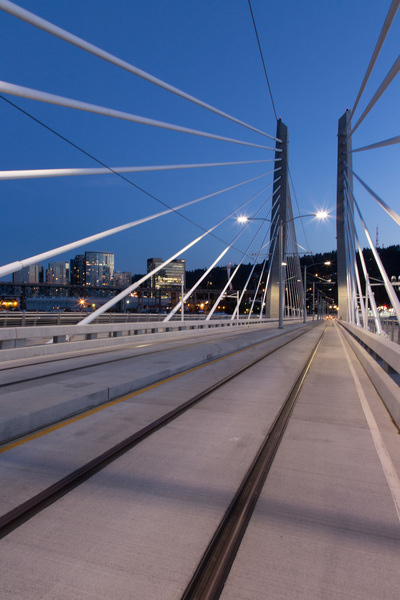 It’s great to photograph a bridge that is new and not open yet, as it’s so clean and fresh and empty of traffic.  This bridge is quite elegant in design, too.  It opens in mid-September. 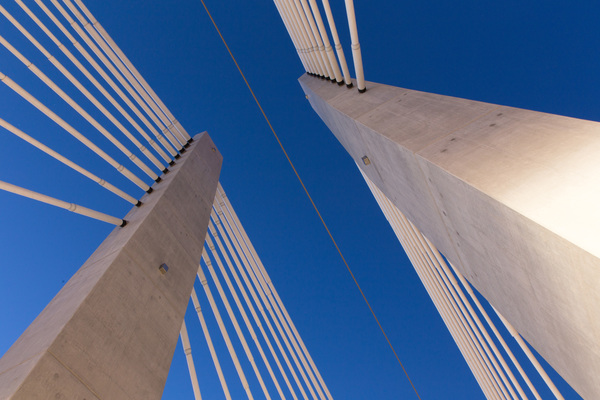 People who know my work know I like the graphic abstract views and this bridge offered many! 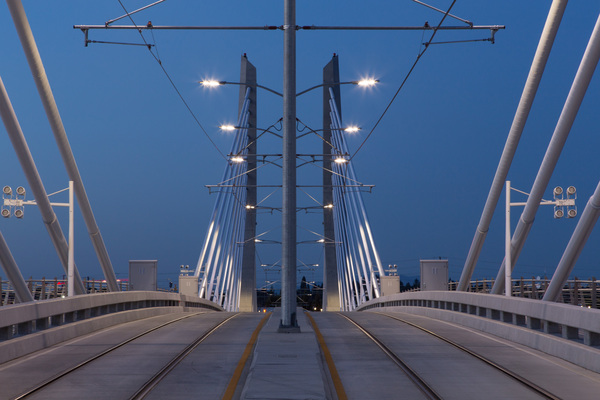 There were many symmetrical views to be had, too, including this twilight shot.  It seems lately that I’ve been shooting many bridges.  I really enjoy it, as the grand scale and the design on may of them lead themselves well to well thought out photography. 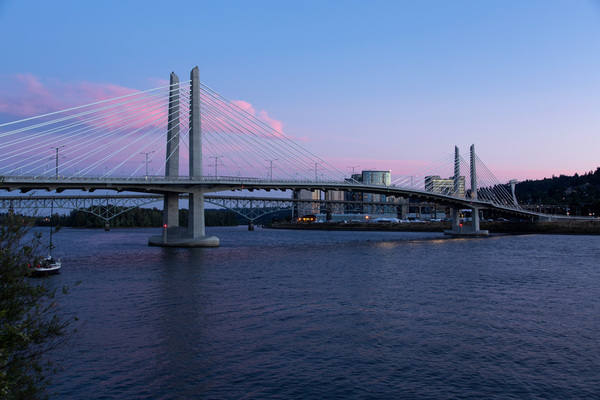 The following evening, I searched of an overall view like the one above.  I didn’t like the look or texture of the water (from the stiff wind), so I used in interesting photographic trick… 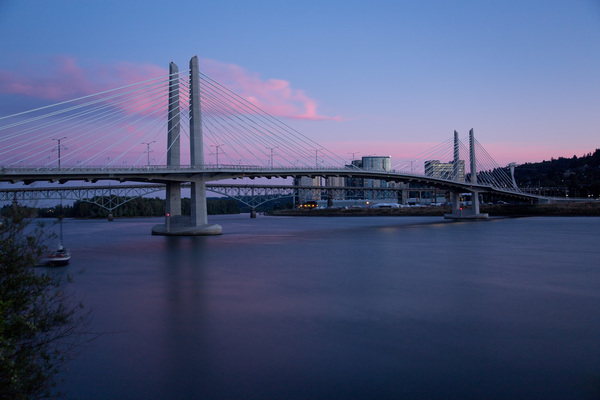 …I used a 10 stop neutral density filter.  It is simply a very dark gray filter you screw onto the front of the lens.  You can barely see through it as it’s so dark.  While the previous exposure was 1/30 of a second at f11, with the ND filter it became 30 seconds at f11.  This long exposure smoothed out the texture in the water which makes your eye go to the bridge as the water appears as smooth as the sky.  The magenta-colored clouds also softened a little, too, as they moved a bit in 30 seconds.  This gave me the look I wanted. 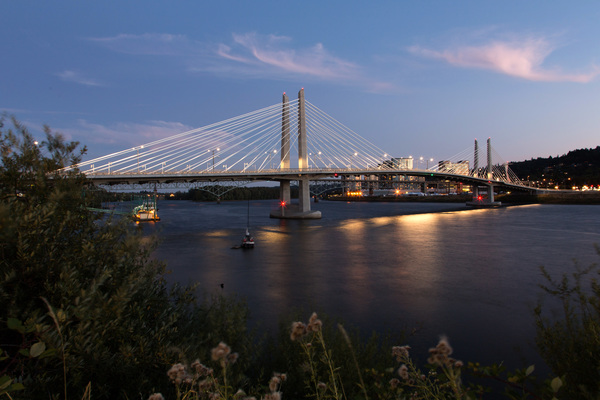 Of course, I waited until the perfect match of twilight and ambient light to get this view, along with several others from a different vantage point and with different lenses. 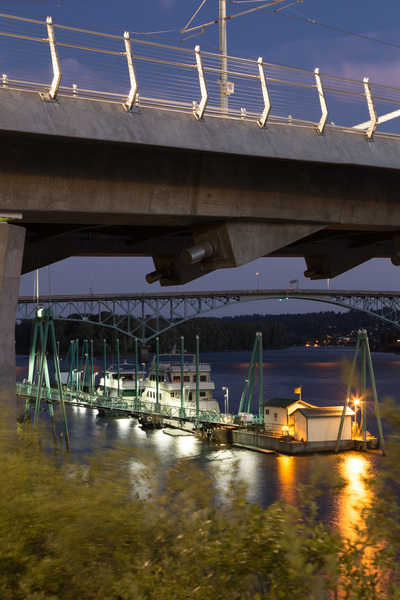 I continued to shoot beyond twilight until almost midnight that balmy evening.  This image of the new bridge with a dock behind it and the Ross Island Bridge in the distance has interesting layering and texture.  The foliage in the foreground is moving in the breeze, softening that part of the image.

There is an esplanade along the Willamette River for pedestrians and cyclists (Portland is a very bicycle-friendly city).  In this image, there is a large red neon sign behind me for OMSI (the Oregon Museum of Science and Industry).  The light from the sign was spilling onto these benches.  It was barely noticeable to the naked eye at the time, but I knew the camera would see it.  In the background is the Marquam Bridge (also known as the I-5 bridge.)  Yes, it’s the same Interstate 5 that I’ve been shooting in Southern California over the past few years–just 750+ miles north. 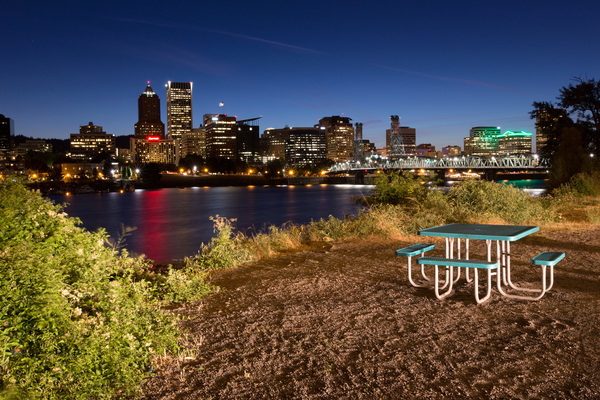 Further down the esplanade, I saw this park bench.  It was being lit by a TV crew that was filming an announcer with downtown in the background.  I took advantage of this interesting light.  Otherwise, it would have been very dark in the foreground. 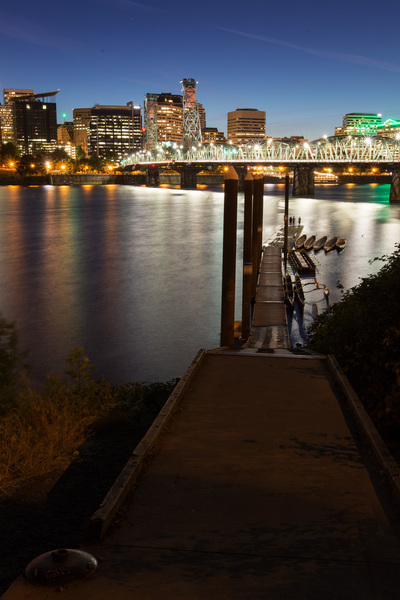 Earlier in the day, I saw this boat ramp that was being used by kayakers and other boaters that my former assistant, Justin and I explored.  He moved to Portland from LA a while back.  It had a great look at night with the city reflecting off of it with the boats.  I quickly increased the ISO (camera sensitivity) from 200 to 800 to make this a 2 second exposure, as I wanted to see the figures silhouetted at the end of the dock.  They would have probably been too blurry at 8-10 seconds. 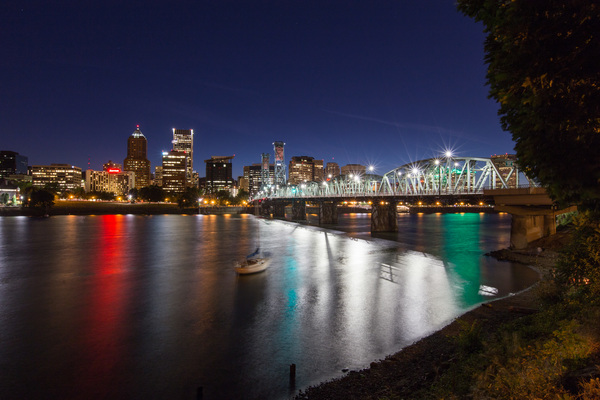 My goal was to get some nice skyline views of Portland and I got this one with the Hawthorne Bridge.  Twilight is just about finished for the day.  The red lights reflected off the water are from the Marriott Hotel and the green lights from Bank of America Financial Center. 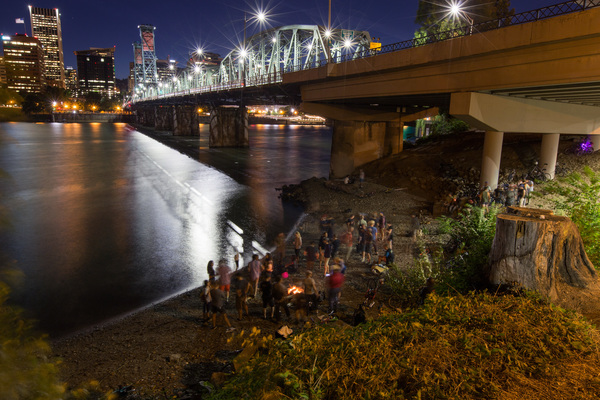 At around 11pm, a crowd of cyclists stopped by the Hawthorne Bridge and decided to have a party, complete with music and a bonfire–on a Thursday night, no less.  The people of Portland never cease to amaze me… 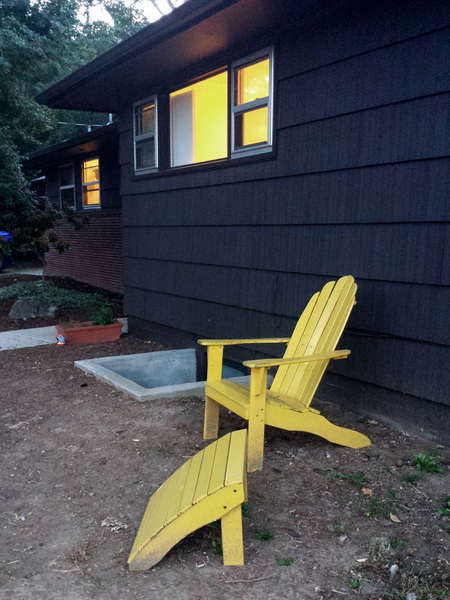 You always have to be on the lookout for interesting images.  Walking back to my friend’s place after dinner with some of Portland’s fine brews, I noticed this view on someone’s front yard.  There was a yellow light and the yellow Adirondack chair in front of a deep blue house.  It was twilight.  Having only my cell phone, I snapped this.  Sometimes you have to use the camera you have even if it’s a just a phone.  That’s photography today.

On another note, book sales for my Bay Bridge Book have been brisk–which is good!  Many of you have bought your copy from Nazraeli Press’s website and I thank you.  I’m in the process of arranging for a book launching party in the near future in the Bay Area.  I will post the details here when I get it confirmed.  In case you missed it, here is a link to the website for my book:

Also, I wanted to mention that I will be co-leading a photo workshop on night photography with Lance Keimig December 3-6 in Death Valley.  We have some sign-ups already and I’m looking forward to it, as I love DV that time of year when it’s in the high 70s and there are few tourists.  Learn many of the tricks and styles of night shooting with the very capable digital cameras of today.  Here is a link to the details:

13 Responses to The Bridges of Portland, OR