First, happy new year to you all.  Can’t believe another year has gone by.

In early December I co-lead a Night Photography workshop with Lance Keimig in Death Valley.  It was a small, intimate group.  Because of that, the participants got some quality time to ask questions and learn some pointers.  Here are a few images from the long weekend. 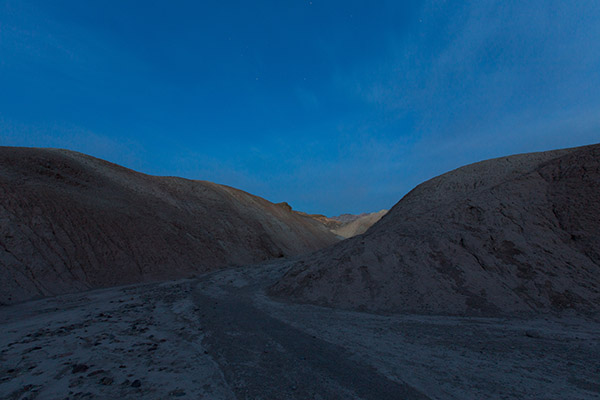 Many of you know I love Death Valley and its solitude and starkness.  It’s probably my favorite national park and I have been going for over 40 years.  On one evening we went into the hills near Zabriskie Point, which has little vegetation giving it an other worldly quality.  It’s also dead quiet.  This shot was made after sunset looking east.  The last of the evening glow is illuminating the higher hill in the center in this 30 second exposure. 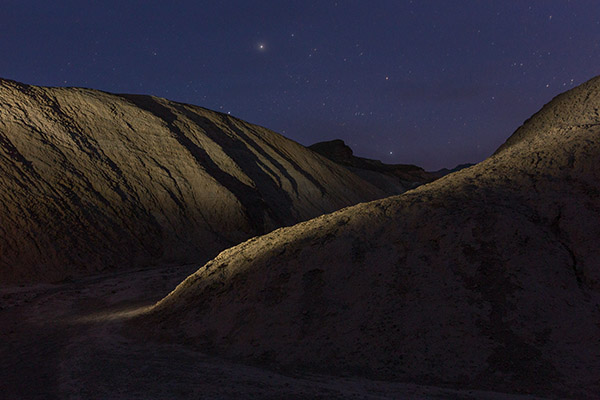 It became very dark in the canyons and hills after the last glow of the day.  There was no moon that night.  I decided to do a short exposure, high ISO image.  This enables you to render the stars as pinpoints.  In the 20 seconds I lit the hillsides with a little incandescent flashlight raking from the side to give some definition and foreground interest, yet still having a sense of mystery.  One of the attendees was about 30 feet away also making an exposure with my lighting which looks very different. 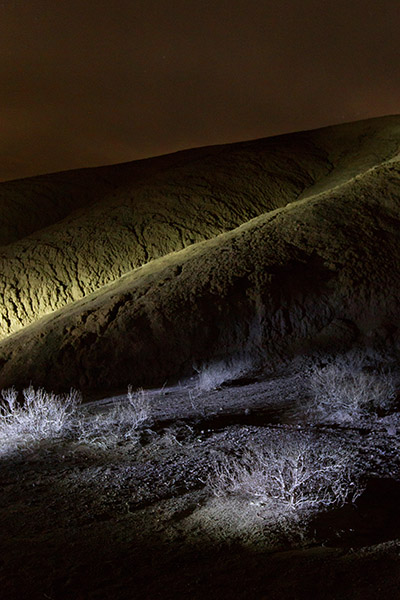 This image was made about 50 feet away from the other shot and again is short exposure, high ISO shot, but the clouds came in so there are no stars.  I used an incandescent flashlight on the background hills and a cold almost blue LED lamp to light the dried brush in the foreground.  Making the color balance neutral for the brush, rendered the sky a mars-like orange with mustard colored hills.  It took about a dozen tries to get this just the way I wanted it.  I love the texture and mixed lighting.   I don’t typically shoot this way but I have to admit, it was fun to try something different and I reveled at being in the remote area.  It actually feels intimate to be in barren nature like this.  There was a week’s worth of images to be made all within 100 feet. 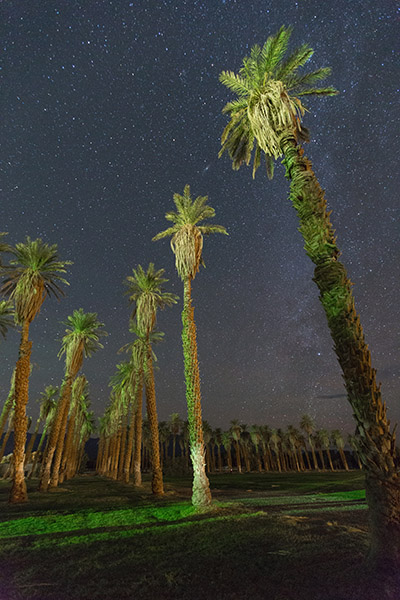 On one evening we went shooting in the date palm garden in Furnace Creek.  There was a little bit of mercury vapor (greenish) light spilling from the Ranch a few hundred feet away, illuminating the trees.  Again, I decided to do a short exposure, high ISO image.  It renders the stars as pinpoints, as the exposure is “only” 20 seconds.  Longer exposures than that will leave star trails like in the two images below.  Today’s modern, highly sensitive digital cameras can shoot at ISO3200, 6400 or more.  This “astro photography” style of pinpoint stars couldn’t be done until just a few years ago.  Note that you can see the Milky Way on the right side.  The black horizontal “smudge” on the right is actually a cloud. 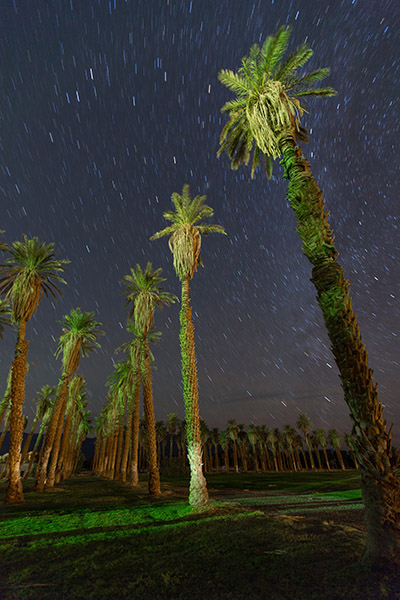 I’ve been doing night photography so long that I like the star trails, as they add the dimension of time to the image.  The smoothness and “flowing” of the star trails reminds me that we are moving as the earth spins.  This is how I envision the night sky, photographically.  It is a low ISO200 shot for 5 minutes at f5.6.  Note how the few clouds have moved and the Milky Way has blurred during the exposure. 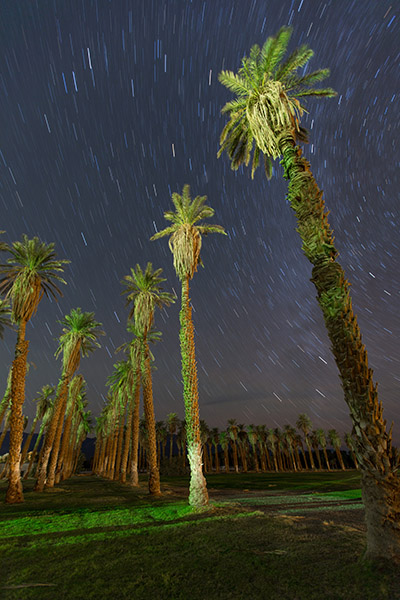 The star trails ‘moving’ vertically from the top seemed very dramatic, so I decided double the time to 10 minutes to see more star trails.  Of course, I had to stop down from f5.6 to f8 to keep the exposure the same.   These three exposures were an exercise in different “types” of night shooting of the same view.  The third one is my favorite, but you might think otherwise.

Without getting to technical, in the past with film, you had just the two variables of shutter speed (time) and lens aperture to get the proper exposure.  Today, you have the third variable of being able to change the ISO (the sensor sensitivity or the equivalent of film speed) at will.  This was a difficult concept for many of the students, but once you understand it, you have more options on how to shoot for different effects.  I use this “third variable” option often. 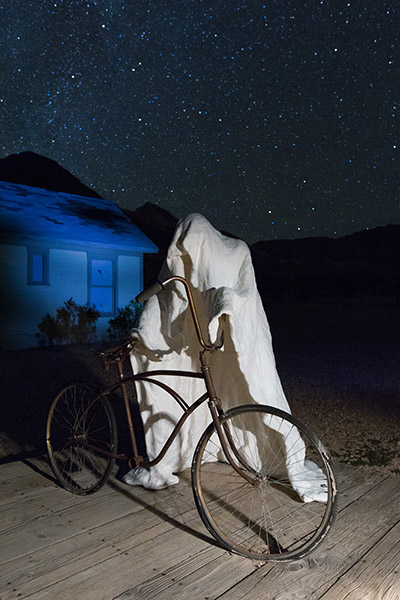 On another evening we went to Rhyolite, NV, a lonely ‘ghost town’.  Nearby is a museum called the Goldwell Outdoor Art Museum.  It’s open 24/7 and very mysterious and spooky at night with the white fiberglass sculptures in the open desert.  It’s pitch dark at night with no moon, so you have to light it.  I worked with one of the students and we lit this together during the 20 second exposure.  No compositing here!  I used a half-dead (warm colored) incandescent lamp on the Grim Reaper-like figure while she used an LED lamp on the background building for interest and color.  I then balanced the warm light to white, making the LED very blue.  It’s another high ISO image, as the pinpoint stars are an important part of this image.  It took us quite a bit of experimenting to get the lighting just right.  I always suggest to find the angle and compositon you want and then spend the time to get the exposure and lighting right.  Sometimes the image has to be “honed” or “polished”.  I’ve shot this figure many times over the years and they are all very different.  To be quite honest, I’ve never been to the museum in the daytime in all the years I’ve been going! 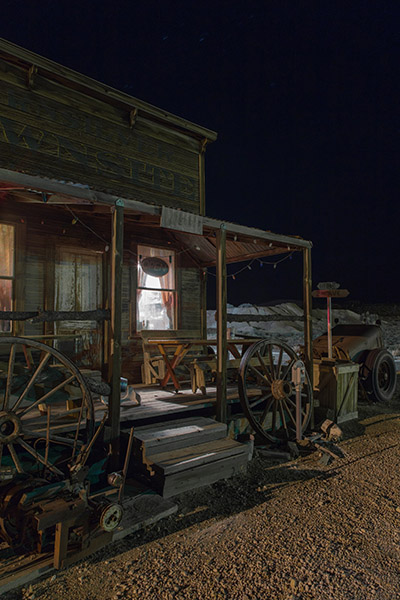 On the last evening we went to remote ‘ghost town’ in Nevada called Gold Point.  It was very remote and a two hour lonely drive from Death Valley.  There were lights on in town, and in the buildings but no sign of people.  I felt like we were in a Twilight Zone episode and it was cold (in the 20s), quiet except for the wind (which made it seem so much colder).  Scenes like the above were everywhere.  I’ve been in many ghost towns during the day and at night but this one was very creepy.  I felt there were eyes watching me as I roamed the four block town.  This shot is all available light. 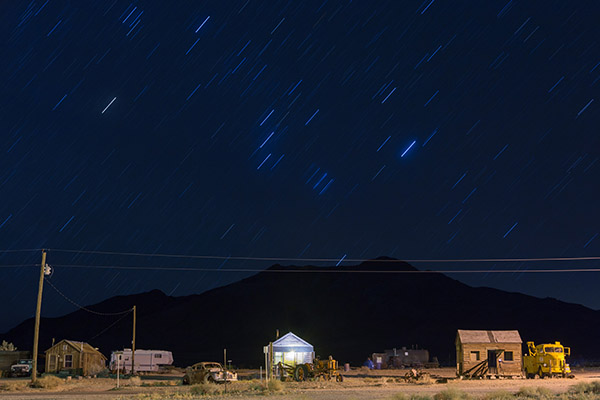 Here you can see the light on the porch of the cabin in the middle is lit.  There was no one and nothing inside.  The yellow truck on the right license plates showed that it hadn’t been registered (or probably driven) since 1980.  I made a 10 minute exposure to pick up the definition of the blackness of the surrounding hillside against the night sky.  All the light is from a single sodium vapor orange street lamp out of the image on the right.  It seemed that there was absolutely nothing beyond the town, as it was so dark with no lights, towns or anything else but raw, open desert in all directions.  We called it a night early because of the bone chilling winds and dropping thermometer and two hour drive back.

On another note, my photo stock agency, Alamy, is featuring me this month.  Have a look and there is also a link to images that I’ve posted with them to market worldwide.  I’m always adding images, too.  It’s a varied group, for sure!